Been working on this in the background for a while. Midtown Public House just passed the 1 year mark, and we have been writing our taplist on chalkboards until now. This means that taps changed mid shift did not get updated because it requires climbing up and writing everything out, which is not possible while the restaurant is open, for both safety and time reasons. Thanks to taplist.io, we now have digital signage. The TVs are getting wall mounted this week, but for now we have active display in the corner. I grabbed a shot of the screen on location, and this morning I finished my last task of adding the logo on the banner(recommended banner size is off by 30px btw) The backlit screen is my own personal TV, so I can test and push changes without having to be on site. As the social media manager i’m sort of on call 24/7, but the biggest hurdle I’ve faced so far is that I always had to make a trip on site to get pictures of the taplist to to do new brew writeups. Now I can handle it all from home, and when the waitstaff swaps kegs I get notified in real time. Thanks so much, and I hope to a part of continued development. Bring on that paid service option! In the meantime, anybody have any tips on integrating taplist with Facebook? 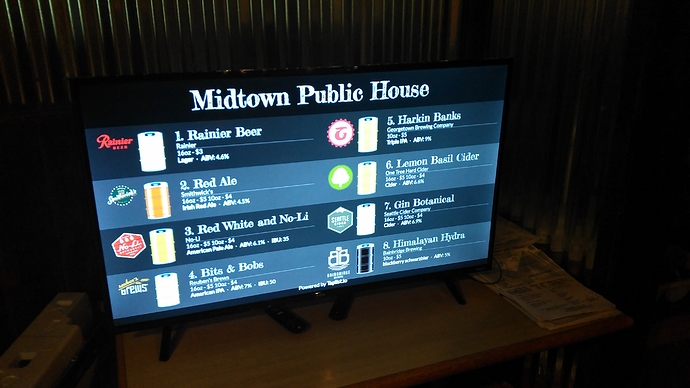 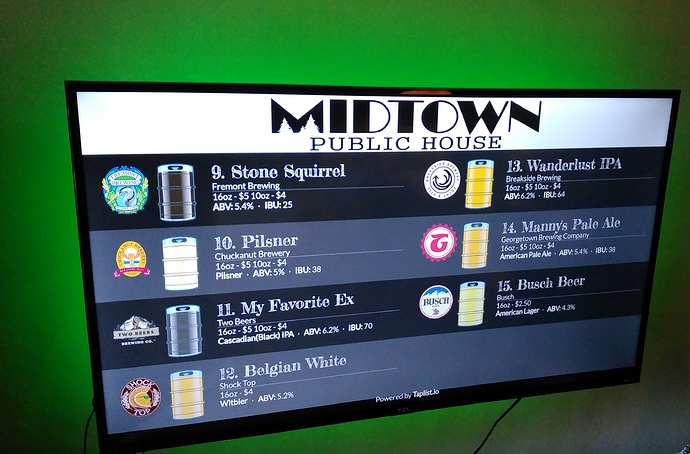 This is awesome thanks! Thanks for sharing and for the photos, it’s great to hear how it’s solved problems for you. And the list looks mighty tasty, too!

We’re pretty spoiled by our access to Seattle and Oregon breweries. We are a bit remote though so our distribution lists are limited and all the bars in the area have the same buying options. We’ve started making personal keg runs to local breweries, traveling up to two ours or so to get beers from the Olympic, and Kitsap Peninsulas, as well as the Tacoma area.