I would love to see something for taps that aren’t numbered. I have two, 3 tap kegerators that I use L,C,R for left, center and right. I have to delete the beer name and leave L, C or R which doesn’t allow me to keep beer names in my historical database. Maybe there is an easy way to do this that I’m missing?

Hey @79eagan and welcome aboard!

Renaming taps has been an every-so-often request for a long time, although curiously, I can’t find a consolidated feature request thread for it. Let’s make this the one.

I’m putting this on the shortlist for some attention soon; it’s a modest change to some under-the-hood stuff, but I think will be worth it for the flexibility.

Mikey,
Love this!! Thanks man!! I have an odd setup with two keezers on opposites sides of my brewery and people are often confused when looking at my tap list. Anything that makes renaming taps with letters, numbers, symbols, etc. would be super helpful.

I would also be interested in the option I’m away to convert the caravan to have a tap and was thinking if I could pop the extra tap on then I can have a quick glance and remind myself what it has plus I may get a 3 PLAATO so I know what is actually going on!!!
Allan

I’d also love this! I have a 3-tap kegerator and while I’ve been using 1,2,3 for the taps, it would be so much more intuitive to use Left, Center and Right.

This is a feature I would love to see - I also have 3 taps, and use them as L, R, and C. In addition, I have color coded my lines inside the kegerator, so I know which lines connect to which tap. In my case, I have a red, blue, and green line that connect to L, R, and C taps. This makes it easy to know exactly which keg is attached to which line.

Added to this, I would like to bring up a previous topic that taplist staff said was on the short list - the ability to rotate kegs. As a homebrewer, I have 5 kegs, and again all are color coded. I would like a way to reuse a keg with a new beverage in it.

And, as long as I’m making reguests

, I would love to see Fermenting (or Brewing) added to On tap and On deck. That way, on my screen I could show what’s on tap, what’s kegged and ready to go, and what’s in process and nearly ready.

@TG.Valley the “Fermenting” option is great. Can I add my $0.02 that this function would be extra awesome once integration with Tilt Hydrometer goes live? Would be badass to show what you have in the fermenter, the OG/CG/FG and even a completion % on my taplist display! (Extra bonus geek points if you can show the line graph like Brewfather does!!) 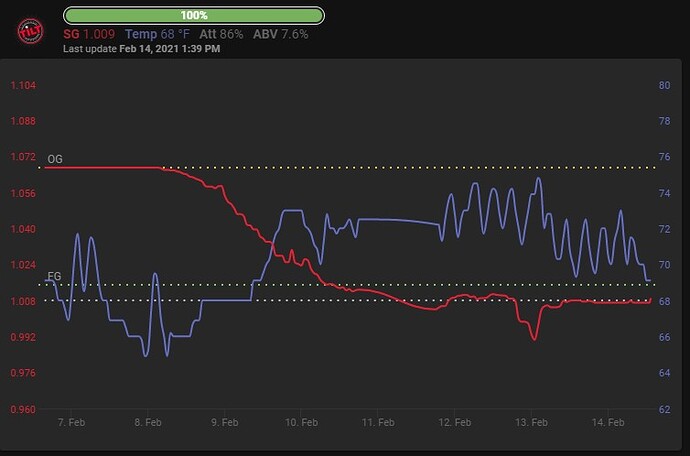 Okay, we’re on our way! You can now set a label on taps: Click Configure tap from the On Tap page, then look for “Label this tap”.

When a label is set, it will be shown in the On Tap list:

Label’s don’t show up on themes (web/tv)… yet! We will be updating themes to show these labels when the “show tap number setting” is enabled.

Thanks for all of your hard work and for getting the new tap layout all set. This is why Taplist.io is the best!!! I am having one small problem which is likely something I’m doing wrong on my end but I can’t see the new tap description on my phone or tap display. I’ve tried changing background colors but it just doesn’t look like it’s showing up. Again, thank you for all of your help and hard work!!

@79eagan no, you’re not wrong! We simply haven’t updated the themes yet (making sure this won’t break anyone!) Only a baby step thus far.

Theme updates will be applied very soon - will post here when done.