On deck kegs is a great feature, but it should be easier (maybe it is and I’m just missing it) to move an ondeck keg onto a tap. If I have an offline tap, “Add a keg” should really be “Quick Add a keg” and there should be another link to move an on deck keg online. and even on the keg add, maybe an option to pick a previously tapped keg (for frequent used).

Also it would be a good option to be able to show on deck kegs on the tap list screen. maybe just names and types or something shorter. even better would be a status option for homebrewers to show “fermenting” etc.

I knew I was forgetting something… Part one of this should be working now, take a look:

When you have kegs on deck, they’ll show up as the first option:

Part 2 should be done now: you can now add a public description to any keg, to override the default beverage description: 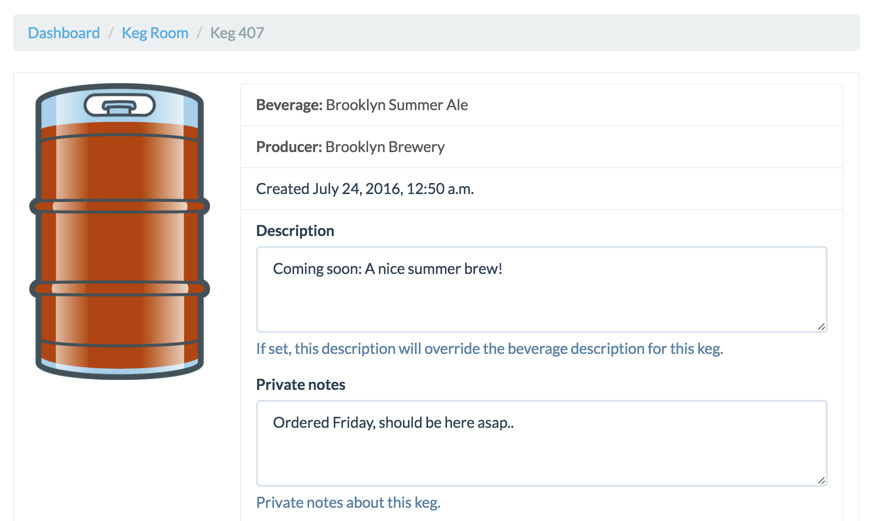 (Whoops — I still need to add the settings for showing these in the display.)

when you create the actual keg, it’s an option

I still don’t see that screen. How do you get there, from the initial taplist.io landing page. I’ve made kegs, edited them, no problem. I just don’t ever get to that screen.

Go to the beverage database and pick a beverage. click create/tap keg.

There we go. Thanks, Tyler. Maybe that could be a little more clear on that screen? Maybe it’s me. Actually, it’s probably just me.

Hah, not just you! The two different ways to add a keg really shouldn’t be that different – I’ll see if I can clean this up.