This theme shows taps in a 4x2 configuration; it tries to make better use of the space when you have quite a few taps.

It doesn’t look great on desktop (yet), but if you have lots of taps it’d be great if you can give it a try. Cheers!

Looks “ok” on my desktop. The only thing that is odd is the fact that it seems to put taps 1-4 on the left top to bottom but puts 5-8 on the right with a space on the top and then 5,6,7. Maybe that’s because I only have 7 taps now? Not sure, I will add an 8th and see what/if there are changes to the layout. Otherwise, great use of space.

I can also check it out on my tv at home tonight too.

Awesome! I’ll have to check it out on my taplist display tonight.

Right now, I only have 7 taps on and I see the same thing … that will be remedied tonight when I add my Alaskan Amber Clone

Thanks for the quick check! I think I might have broken something somewhere between my test environment and pushing this live

Will fix 'er up soon and circle back here, cheers.

Empty taps get a shortened row, but I don’t think that’s a problem. The second column does seem to be anchored to the bottom of the grid instead of the top.

Hey gang - just a delayed note to say the vertical alignment issue has been fixed!

Mine displays oddly still for some reason, in Griddy 2.0 and now in Griddy since the change. Attached are pictures so you can see what I mean. This is on a FireTV Stick running the app downloaded from the Amazon App Store. 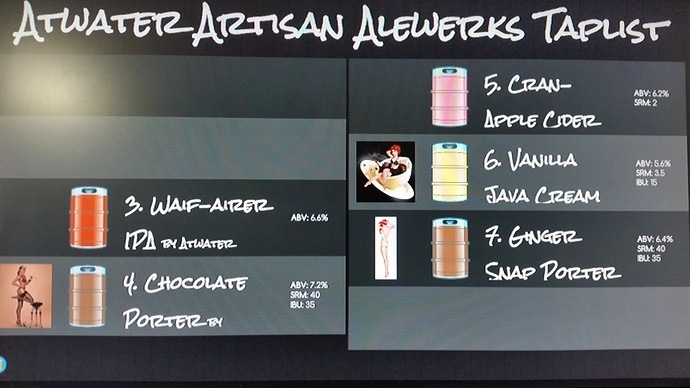 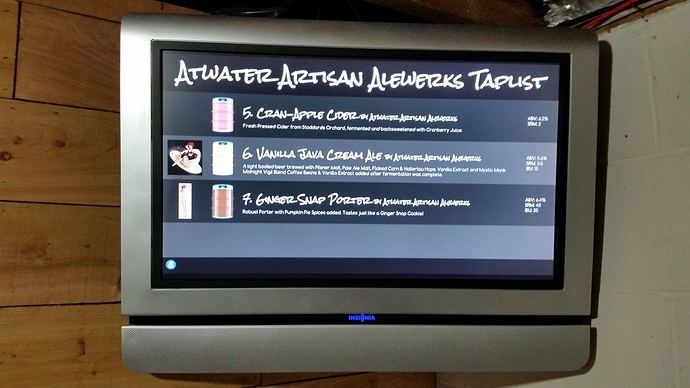 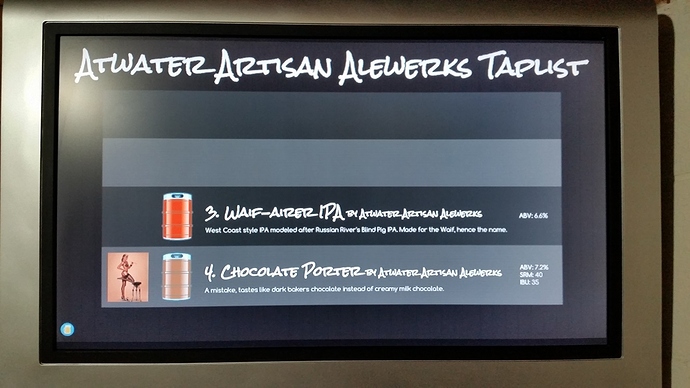 I’d honestly like to have the offline taps shown. Either way, I would think that this is a display issue that needs to be looked into. I even tried adding “Empty” as a keg type to fill all the taps up and the display issue persists. In the app and via a web browser on any display I utilize (RPI, FireTV Stick, Windows Laptop setup as a display).

Again taps 1-4 show up with a few inches of border along the left/right, taps 5-8 show up and stretch across the entire screen.

Acknowledged! Thanks for the screenshots - I can see the issue now. I’ll look into this, should be an easy fix.

Great, thanks! Any traction on this yet?

I can only comment from PC display, but it appears you need to reduce the line spacing for beer names/breweries with longer titles. This ends up using space that could be served for the descriptions which then quickly get cut off.

Certainly allowing for modifying the font size would help, but giving more space in these cases should be low hanging fruit.

I get the same thing as natsteff.