Hey everyone! Working on a new theme, now available for testing. It is called, unimaginatively, “Dense”. Preview: 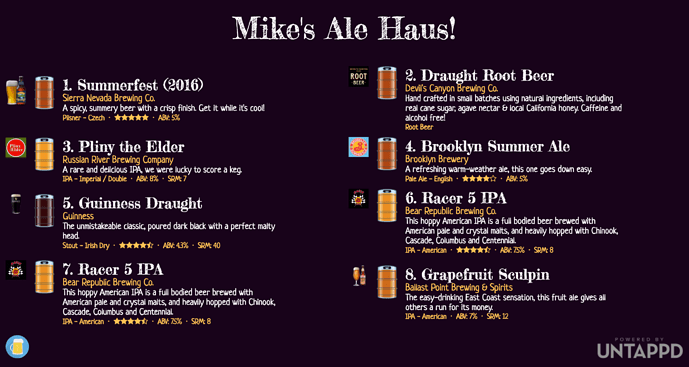 Known issues (all to be fixed):

If you’re feeling adventurous, just give it a try in Look and Feel settings. And let me know what you

There’s one small glitch currently (rating stars aren’t rendering), and you’re best off hiding descriptions or using really short ones. Give it a shot!

I would like to be able to choose how the numbers of each keg are ordered. Griddy goes down the columns and this one goes across. Either that or make an option in griddy to remove the different shades from each keg.

Plus the option for a full background image instead of just a header would be awesome to all simple textures like a slate/stone effect.

BTW well done on a great effort with this app.

My first post… just started messing around with the app last night.
Great app, thanks for making it!
I second this request to be able to decide which way the numbering goes…
We have 14 taps, and I REALLY don’t want it to “scroll” to page 2 or 3… I like seeing all 14 at once.
So “Dense” is our only option.
It would be great if the taps could be listed 1-7 in left column, and 8-14 in right column.
And while I’m asking… it would also be great if it would “fit” to the screen by making the fonts smaller. I would like to add more info for each beer.,… but I can only add one line of description. Any more, and it kicks taps to “page 2”.
Regardless… this is a great app, especially for the price lol. Thanks again! 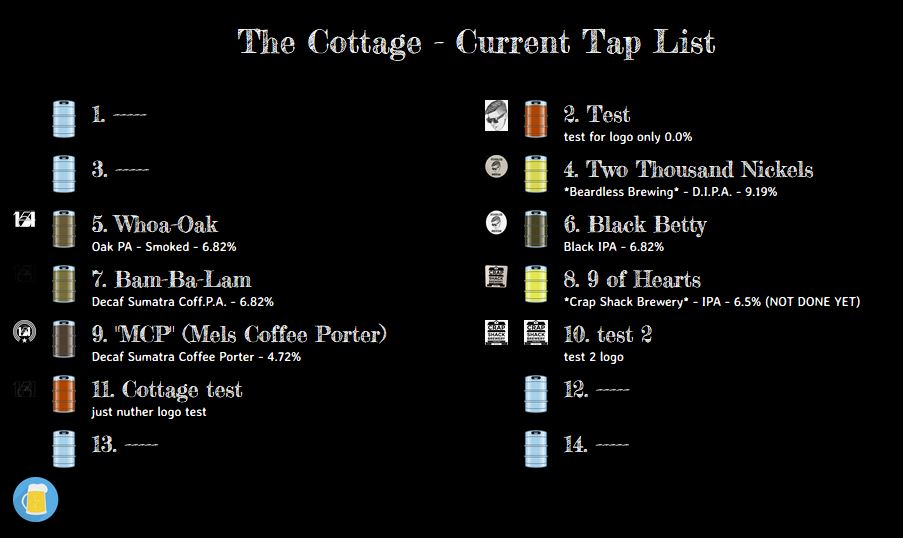 We’re using Dense on our kegerator and for space reasons we can only fit a screen in portrait at the side. Using the two column mode makes things a little small. One column works well, but the tap order is wrong (1, 4, 2, 5, 3…); any chance one column could also be supported? 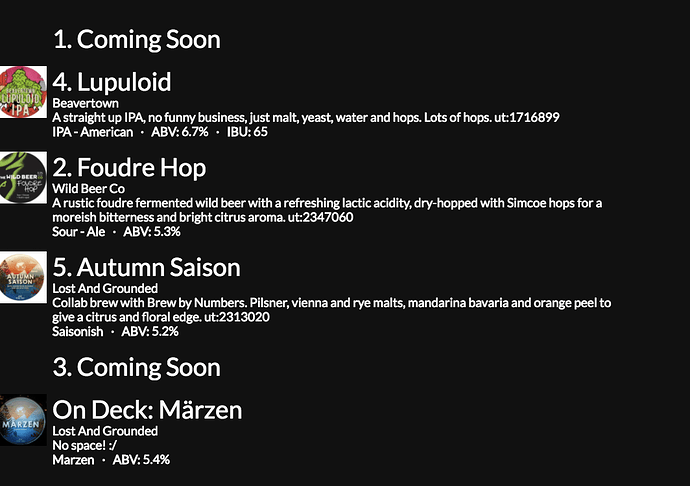 That’s definitely a bug! Taking a look at it now.

This should be resolved! Please take a look at the updated thread:

Improvements to Dense and Jumbo themes

Hi folks! We’ve rolled out some improvements to the Dense and Jumbo themes, along with some new settings. Please give them a try! Note: If you’re still using Griddy, now’s a great time to try Dense. We’ll be phasing out the Griddy soon in order to make way for some new improvements, so please let me know your feedback. New feature: Select layout order A top request, you can now choose whether taps are laid out right-to-left, or top to bottom. Vertical layout (default): [image] Horizontal la…

I’m going to close this thread to move discussion there. Thanks!