Is it possible to add flow meters?

I’m wondering if it would be possible to include data from flow meters into the tap list? If I use a raspberry 3 that would record the data, could I have an up to date tap list?

This would be pretty cool, but would make sense to keep it basic- just have taplist keep track of volume- starting/current, and be able to update it via the API.

That would let people use whatever methodology they wanted to get the data (scales, flowmeters, manually update from a magnet level, etc) and pass it to taplist.

I love the idea! It’s something I’ve been deliberately holding back on, mostly to keep me from turning this into Kegbot 2.0

It’s probably still a little ways off, but the idea will be basically along the lines of what Tyler says:

We can leave this feature request thread open to track this, but I’d expect this to be a few months out at the earliest.

I would love this feature, I plan on using a program called Brucontrol to do the flow monitoring. If Taplist.io could somehow pull this data and display it that would be great. Especially with an RSS feed integrated with Untappd.

Any progress in the area of flow meter support?

If there is interest from Mikey and the Taplist community, we here at Kegtron would like to offer our help.

Our keg monitors coupled with Taplist’s beautiful UI could be an interesting combo.

This is exactly what I was looking for, Steve … the marriage of Taplist.io and Kegtron. Of course, as Mikey (and tyler) pointed out, the Taplist.io API should be agnostic to the specific level-sensing methodology.

With the API in place, the Kegtron community should be able to help support Taplist.io users in connecting to the Kegtron wireless keg monitors (either through this forum and/or a Kegtron forum), minimizing the support workload on both Mikey and Steve.

Man, this is exciting. I think there will be tremendous interest in this across the broader brewing community. 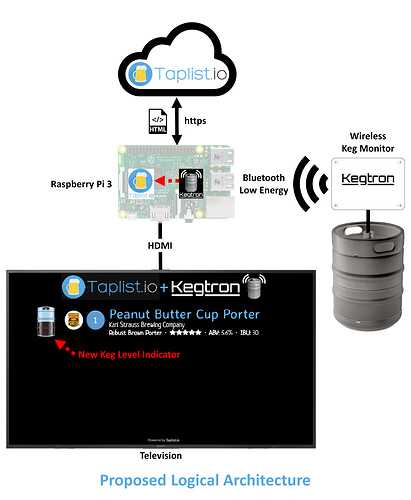 I’ve put together a crude Taplist.io + Kegtron logical architecture diagram. It leverages the fact that: Taplist.io is supported on the Raspberry Pi 3; and the Raspberry Pi 3 has the BLE (Bluetooth Low Energy) support needed to communicate with the Kegtron Wireless Keg Monitor. I’m not sure I’ve depicted the proposed Taplist.io API correctly. If it’s incorrect, please let me know and I’ll correct the diagram. Also, I’ve depicted the Kegtron routine as a stand-alone process. Conceivably, it could be integrated into the Taplist.io app. I’ll leave that decision to you and Steve.

I would also like a combination of Kegtron and Taplist. Please check if you can make it work

Mikey has said he loves the idea, too!

Since the discussion is still going, It doesn’t need to be real time either which I think was mentioned above. If you could create a basic timer that counted down it would be perfect for me. For my home bar we will kill 1 of the 3 kegs I have on tap about every 6 months. So if a gauge was updated as a result of a basic timer I set it would work well. For example: 6 months is roughly 180 days so each day (or it could be another scale like week) the timer would decrease by roughly .5% and therefore the gauge would decrease by .5% total. I would love it if the 3d keg photos could drop their volume like digital pour does, but would settle for a “xx% remaining” column.

After further consideration, I think it would be an absolute travesty to base Taplist.io keg level support on anything other than an Amazon Fire TV stick. The existing Fire TV stick solution is simply too elegant. You don’t want to require users to muck with a Raspberry Pi in order to achieve keg level support.

I envision the cloud-based Taplist.io exposing a networked (e.g., RESTful) service of some sort. The keg monitor would simply invoke the service with the keg level.

With the new whiz-bang Taplist.io dashboard / framework, I’m hoping keg level support is just around the corner. I’d like to volunteer to beta test the keg level support. I’d love some insight into what the Taplist.io keg level interface will look like (e.g., auth token, venue identifier, keg identifier, keg level, …). The keg level could be a delta or an absolute value. The value could be expressed as a volume or a percentage. Personally, I think a percentage is the simplest solution. Taplist.io doesn’t need to know the keg size or start volume. With a network outage, the keg monitor doesn’t need to worry about a keg level delta being “lost”. With the keg level expressed as a percentage, Taplist.io will accurately reflect the keg level once network connectivity is restored (even if you poured half a dozen pints while the network was down).

Again, I’d appreciate the opportunity to participate in the Taplist.io keg level support discussions prior to the time the feature is released.

I’ll toss my hat in to add that a public restful API would also allow POS integrations for folks who don’t want to add hardware complexity to their system at this time.

Agreed. I think it would be appropriate to re-title the topic “Keg Level API”. As has been discussed, the API would be agnostic to the specific method (e.g., flow sensor, differential pressure sensor, scale, POS, …) used to monitor / report the keg level.

I am interested into the Kegtron appliance to be added into our 7 tap configuration, and this would be a great benefit to our configuration.

Steve (Keck) at Kegtron is on top of it! Mikey (Taplist.io) has said he’ll expose the keg level API in a few weeks,

I’m sure it’ll just be a matter of time until Steve integrates Kegtron with Taplist.io.

Please scroll up to the top of this topic and cast your vote for this feature.

Just added my vote for this much-anticipated feature.