We’ve got a pretty decent mix of home users and commercial users here. For you folks using Taplist.io in a bar / brewery or other retail setting, this thread’s for you: What are you liking? What could be better? If you set up a TV just for the list, how’s it been going? Any cool photos to share?

I get a lot of great feedback directly but wanted to give y’all a chance to share!

(Bonus points: Where in the world are you and should we visit?

We use it & love it at Grindhaus Brew Lab in Clearwater, FL (and yes, you should visit)! We had Untappd for business and it was great, but at $600/yr it just didn’t give us the ROI that we wanted. In my opinion, Taplist.io is easier to use, plus I love the virtual keg room/on deck section. I followed the tutorial to add a facebook tab, and that worked beautifully. The only things I can think of that I would like is a short code to embed it on our wordpress site (right now we have a link) and a printable version. We also have a homebrew supply store and get a lot of business from small breweries and breweries in planning, and we tell everyone about it. Cheers and thank you!

Thats awesome, thanks for the kind words and feedback, Lisa! Will definitely pop by next time we’re in Florida, looks like a fun shop.

Will look into the shortcode idea! Just took a look at wordpress developer docs and it doesn’t seem too hard.

We certainly have an unfair advantage on price right now

, but if and when we add a paid tier, I’d expect to be competitive with other offerings out there…

Any chance we can get the ability to add more than 12 beers tapped at one time? Using it in a brewery and we have 20 beers on.

We’re liking it. Would be cool to be able to fit more on the screen (when including descriptions it ends up going to 2 pages with 12 taps) Maybe a spot for wifi info for customers or a slideshow image to pop up instead of the scrolling list? Just a couple ideas there. Overall very pleased. We have our menu live on our website as well (managed to embed it. Interesting that it stays on griddy in the embed, no problem with it, probably could change in the embed code.) Very useful for having the taplist live on our site and exactly that same as taproom.
http://www.visionquestbrewing.com/beers/

Another thing is prices - we make our own beer so instead of producer we use that field for prices of samples, pints, 32 oz and 64 oz fills but someway to list pricing would be great

loving it so far though

Were using it at Ookapow Brewing in West Palm Beach Florida. Yes you definitely should visit.

Were serving from 15 taps and have a couple non beer items listed for a total of 17 items at this time. I don’t want to scroll to multiple pages so the only option that makes sense is to use Dense. One issue that is driving me mad is that the taps seem to be scattered randomly on the page. I want to have my non beer items to be the last two items in the list but can’t seem to make that happen. Also on deck beers do not list as coming soon unless I have tap numbers enabled. They just show somewhere in the list randomly. I’d like better control over where they are placed in the list.

One issue that is driving me mad is that the taps seem to be scattered randomly on the page. I want to have my non beer items to be the last two items in the list but can’t seem to make that happen. Also on deck beers do not list as coming soon unless I have tap numbers enabled.

Good news! Both of these issues will be fixed in a change rolling out tomorrow. You also have the option of layout out taps left-to-right (horizontally) or top-to-bottom (vertically), and enabling or disabling an interleaving stripe on the grid.

(As the night before Thanksgiving is a big bar night in the US, we’re avoiding changes today. Plus - where do you imagine I will be?

PS @brewski_59 - your list is beautiful! It’s also one of “busier” dense lists and something that we were doing visual diff testing on. Hope you don’t mind me sharing a screenshot, in case it inspires anyone else… 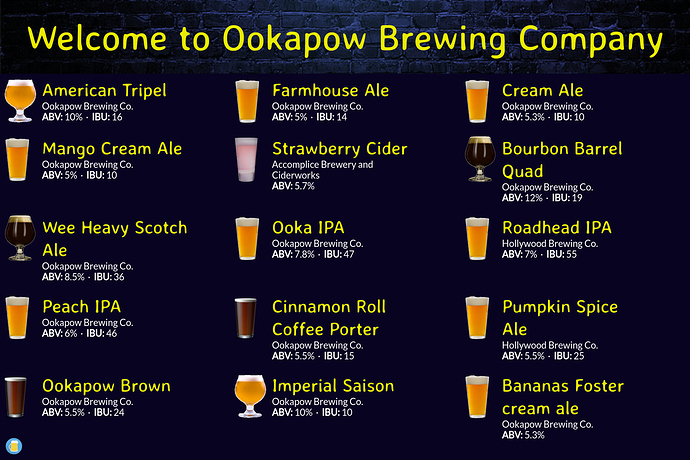 Thanks. Feel free to share. I’m looking forward to testing the changes. Cheers!

FYI: Layout improvements have been rolled out. Please give 'em a try!

Improvements to Dense and Jumbo themes

Hi folks! We’ve rolled out some improvements to the Dense and Jumbo themes, along with some new settings. Please give them a try! Note: If you’re still using Griddy, now’s a great time to try Dense. We’ll be phasing out the Griddy soon in order to make way for some new improvements, so please let me know your feedback. New feature: Select layout order A top request, you can now choose whether taps are laid out right-to-left, or top to bottom. Vertical layout (default): [image] Horizontal la…

For the glasses, upload an image file in place of a logo. Select show logo. Turn off show keg

Gottcha. I will give it try. Thank you!

Any suggestions on how you got the pint glass images?

Where did you get your glass images?

I searched google for images that would fit my need. Using pictures of pints with light or dark colored beer. then using Photoshop, (or your favorite image editor) I cropped them down and sized them where it looked good. Also isolated the background to make it transparent. Saved as a .PNG file then uploaded to the beverage database.

Great! Thank you for the info!!
Cheers!

Here is our latest menu. With the descriptions as detailed as they are we were able to fit 9 of our 10 beers on one page. Hope to squeeze the last one in soon. 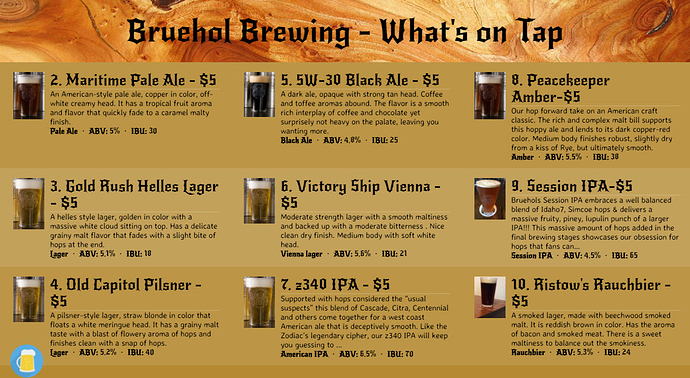 I like the glasses, how did you do that?